It all began as a very simple job – the Foundation had been asked by an opera company to help promote a performance of Handel’s Serse being staged at Opera Holland Park on 30 June. It included a song about a plane tree and as the Foundation had organised an event for tree experts and plane tree enthusiasts yes, of course, we would be happy to help spread the word. After all, we have spent the past 40 years championing some of this country’s most important and beloved tree species, including the plane.

I began to draft a press release.  I knew that Handel lived in Mayfair and that nearby in Berkeley Square were some of London’s finest plane trees.  I simply assumed Handel had thought of these when composing Serse and fitted his tune to these words, later to become world famous as Handel’s Largo,the aria ‘Ombra mai fu’,

“May fate prove kind to you, tender and beautiful leaves of my beloved plane / and may thunder, lightning and tempest never disturb your precious peace, / nor the preying south wind profane you. Never was nature’s / own shade more beloved or sweetly treasured than thine.”

As I wrote about Handel’s time in London and then about the planes in nearby Berkeley Square, I noticed that my original assumption may have been very wrong.  For Berkeley Square’s plane trees had been planted in 1790 – 30 years after Handel’s death.  Surely not, but the plantings are well recorded. Planes are not native and so I looked into the planting dates for other London Planes and discovered the oldest is thought to have been planted in 1680 at Barn Elms near where the London Wetland Centre is now, and a long carriage ride from Handel’s Mayfair pad – one which he was to share, in much later times, with another musical giant – Jimi Hendrix.

As I continued my research I found that George Frederick Handel lived in other places before moving to Mayfair, and on arrival from his home in Germany in 1712 at the age of 27 he was offered accommodation by Mr Matthew Andrews whose estate was at Barn Elms.  By all accounts this was quite a place and the Georgian mansion had enough spare rooms to accommodate Handel.  The house was demolished after a fire in 1954 and nothing of it remains to be seen. Its grounds became overgrown and very much changed since surrounding the magnificent plane, known to the children of the nursery school which meets in this secret woodland location and call the tree ‘Barney’.

I did not think that I had made a major discovery and assumed Barney was well known to opera buffs, but those I asked knew nothing of the possible link.  And as no-one has stepped forward yet to disprove my theory, I’m sticking to the story that, whilst staying at Barn Elms, Handel would take a stroll each morning to the London Plane in the grounds, now in its thirties and grew to enjoy making friends with Barney. Some years later when he wanted to feature a tree and its shade in an opera he remembered his old friend, who still lives in a shady South-west London woodland corner some 342 years later.

A few weeks ago I visited Barn Elms to introduce Frederick Waxman, right, Serse’s musical director and  director Sam Ryan to Barney and was delighted when my friend, the distinguished opera and theatre photographer Clive Barda, offered to record the encounter. 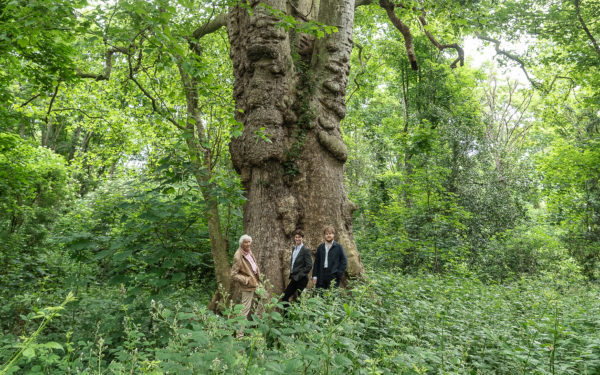 Serse is being performed on Thursday 30 June 2022 as part of Opera Holland Park, by Figure, a young historical performance ensemble, with leading mezzo soprano Cecelia Hall in the title role.

Figure was established last year by Frederick Waxman in the wake of the lockdowns with the aim of expanding the scope of historical performance beyond the typical baroque and renaissance repertoire. It values the intimacy in performance above all, the connection which gives music meaning. Cecelia Hall has appeared at the Metropolitan Opera, Santa Fe Opera and Opera Frankfurt, and soprano Sarah Tynan, who plays Romilda, was recently nominated by the Evening Standard as one of the most influential artists in the UK and has appeared with London’s ENO and the Royal Danish Opera. For further information and to book: https://operahollandpark.com/book-online/58601/

The Plane Tree project is part of The Conservation Foundation’s Heritage Tree programme, created to celebrate our 40th Anniversary.

Please support our work with some of the country’s most loved trees so that future generations will be able to understand and explain the importance of trees and their role in biodiversity. Donations can be made securely online.