Martin Day, nurseryman and friend of The Conservation Foundation died on 12 May.

Martin Day had a passion for elm trees and spent much of his spare time travelling his native Bedfordshire and surrounding counties finding them and recording their details. Martin owned a nursery in Houghton Conquest and contacted The Conservation Foundation in 1996 to see if he could help with its elm projects.  Just at that time the Foundation was receiving applications for Millennium Yews.  Having launched Yews for the Millennium it was expecting a few hundred requests for trees, but this number was soon reached with more applications arriving daily. 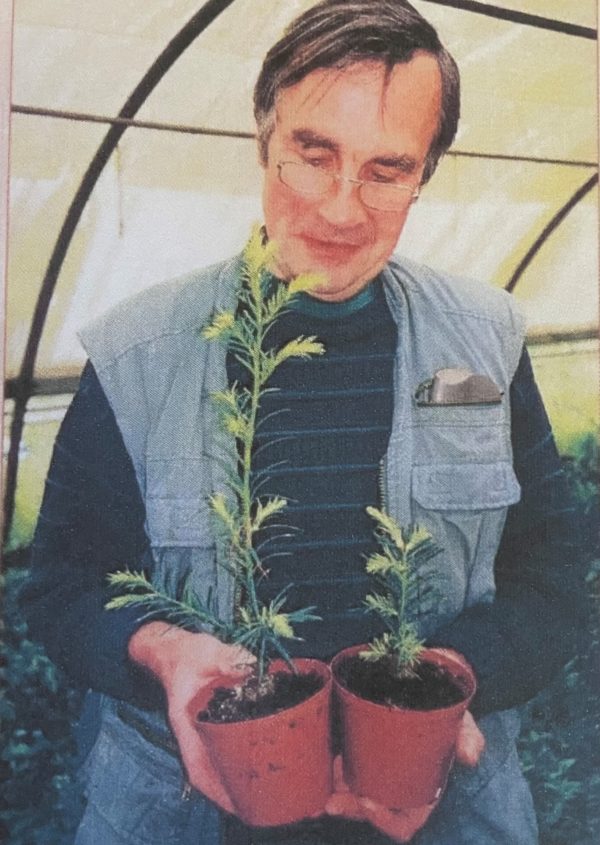 “Martin’s letter arrived at a very fortunate time”, recalls David Shreeve, “albeit his interest was with elms and not yews.  I remember calling to thank him and to see if he could help by looking after cuttings taken from ancient yew trees. These were being collected to grow on for churches to plant in their parishes to celebrate the year 2000. I was to learn that nothing fazed Martin and he was very happy to help – even though the requests rose to a few thousand before long and eventually totalled over 8000!  This involved a major production line involving potting, storing, watering, feeding and eventually transporting.”

Martin lived alone in the family nursery which he had taken over after he left university. He needed help and Rachel Atkinson, who lived in the nearby village, wanted something unusual to do and was just what Martin needed.  Together they grew on enough trees to supply all the distribution services the Foundation organised with the Church of England, many in cathedrals.  Martin’s friend Steve Noble lived nearby and had a transport business and so he became part of the team organising the delivery of trees to the cathedrals, with Martin and Rachel often travelling along to join in the events.

Yews for the Millennium proved a great success, helping to change the view of many in the Church to understand the importance of the awareness of environmental issues for the Church. Today there is a new generation of yew trees in churchyards which trace their history back to the time of Christ and which may grow on for another 1000 years or more.

Martin made it all possible and The Conservation Foundation is very lucky that he came along at just the right time.  And yes, The Foundation did find him things to do with elms and he propagated many from cuttings taken from healthy mature trees growing throughout the country which are now growing at schools and country estates as part of the Great British Elm Experiment.

The yew and elm projects are part of The Conservation Foundation’s Heritage Tree programme, created to celebrate our 40th Anniversary.

Please support our work with some of the country’s most loved trees so that future generations will be able to understand and explain the importance of trees and their role in biodiversity. Donations can be made securely online.