David Bellamy and David Shreeve met at an environmental festival at Marwell Zoo in 1980.  David Shreeve had organised an Elms Across Europe display featuring disease resistant Sapporo Autumn Gold elms propagated in the UK from trees developed by the University of Wisconsin.  David Bellamy was there to take part in a BBC radio recording and had been invited to plant an elm.

As a result of this meeting and the introduction to Elms Across Europe, a project created by PR man Shreeve for the office equipment company Pitney Bowes, Bellamy then a major conservation communicator suggested he devise an educational programme to accompany the trees which would include an audio visual presentation and a 50-year diary.

The elm project proved to be an award-winning scheme and encouraged David Shreeve, who was then working for a major public relations consultancy, to wonder whether other commercial organisations might follow Pitney Bowes’ example in supporting environmental initiatives. Commercial sponsorship at that time was mainly limited to sport and the arts.  This could be an opportunity to break new ground and provide funding for the cash-strapped environmental world.

Shreeve put the idea to the head of his PR firm who saw no future for such a venture and suggested the keen young environmental entrepreneur try his plan elsewhere.

Undaunted, Shreeve asked Bellamy his view:  surely he would know if anything like this was being done.  Although even in those days there was no shortage of environmental organisations seeking funding, Bellamy had heard of nothing similar and offered to help get something started.

With this support from such a leading conservationist, Shreeve went with his idea to Pitney Bowes suggesting that they could achieve additional PR by encouraging other commercial organisations to become environmentally aware using their own successful experience with elms.  Pitney Bowes agreed to help both with cash and in-kind and work on creating The Conservation Foundation began.

With the assistance of the senior management of Pitney Bowes, the two Davids began to plan and by the time the Foundation was launched on BBC TV’s Pebble Mill at One in a live programme staged at the Institute of Directors on 4 March 1982,  it had at least two projects underway – The Ford Conservation Awards and Serafina, a recorded adventure featuring Bellamy as himself and a cast including actors Tom Baker and Joanna Lumley playing the part of a hump back whale, produced for EMI’s Music for Pleasure. 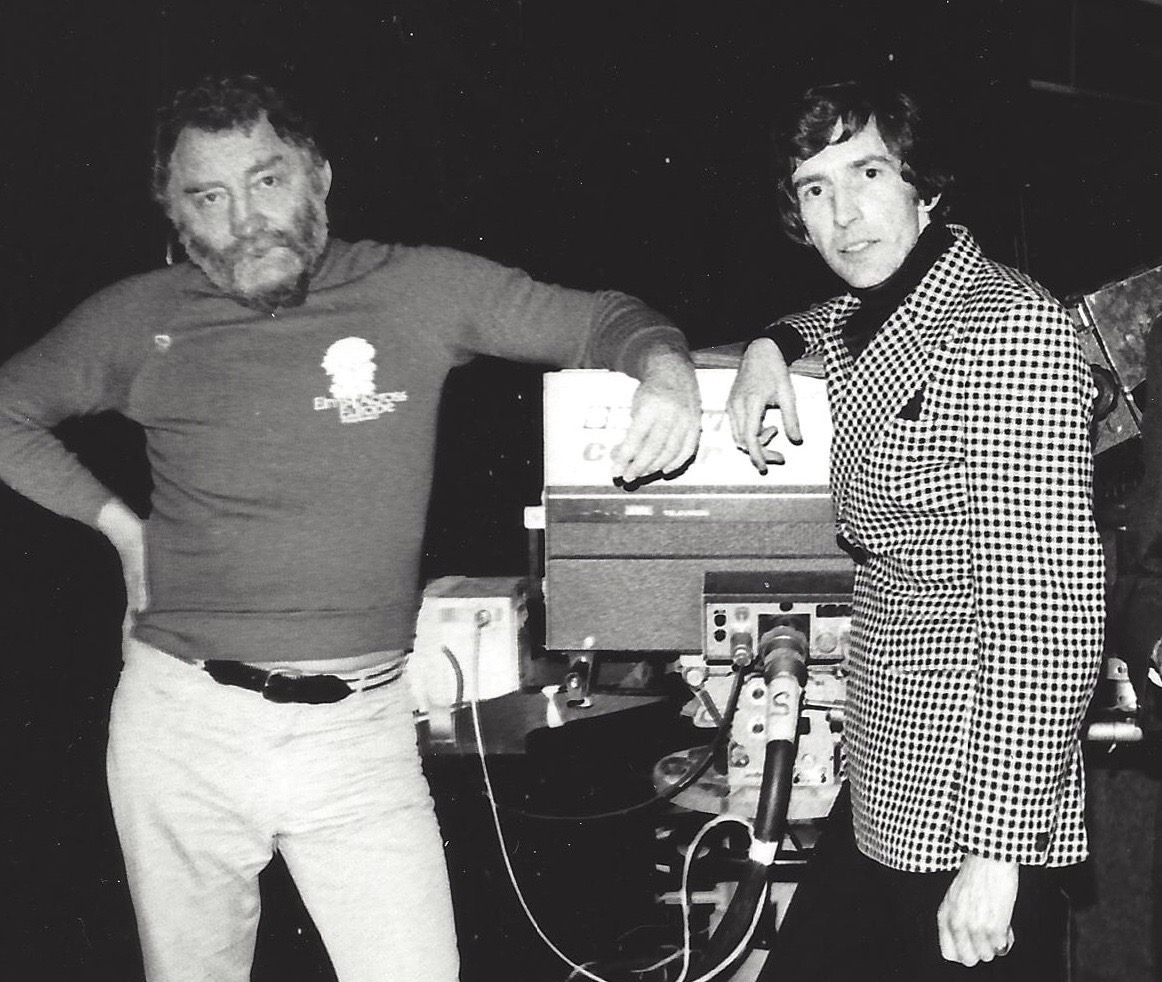 David & David on the set of Pebble Mill.

Listen to the unmistakable voice of David Bellamy, with Tom Baker and Joanna Lumley, recording ‘Serafina: A Whales Story’.

Bellamy was by then, and remained, a high profile campaigner and personality able to announce the launch of the Foundation as a guest on the hugely popular Parkinson show on Saturday on BBC TV. He was also a prolific campaigner for a wide range of causes.  All the established, and not so established, environmental organisations throughout the UK and many more around the world, wanted his name – and face – to raise their profile and spread their messages.  Many invited him to be their president or patron, but the Foundation provided him with a degree of consistency.  In addition, the unlikely combination of the very different personalities of the two Davids made the two a successful creative team.

Large-than-life Bellamy always knew that there would be space at the Foundation or in the Shreeve household for him to work on ideas, read post, give interviews or set up appointments. Sometimes this would lead to new organisations such as when a group of young botanists who attended a Bellamy lecture were inspired. Afterwards they implored him to help them set up an organisation to do for plants what the RSPB had done for birds.  Bellamy suggested they all meet the following day at The Conservation Foundation which had just moved to rooms within the Royal Geographical Society building.  That was the start of Plantlife –which soon grew to be much bigger than the Foundation would ever be.

Bellamy had been constantly travelling the world to make his TV programmes and commercials, give lectures and make public appearances and with no office as such he relied on his wife, Rosemary, and a part-time helper at his home in County Durham, to keep track of his frantic timetable.  Rosemary died a year ago. 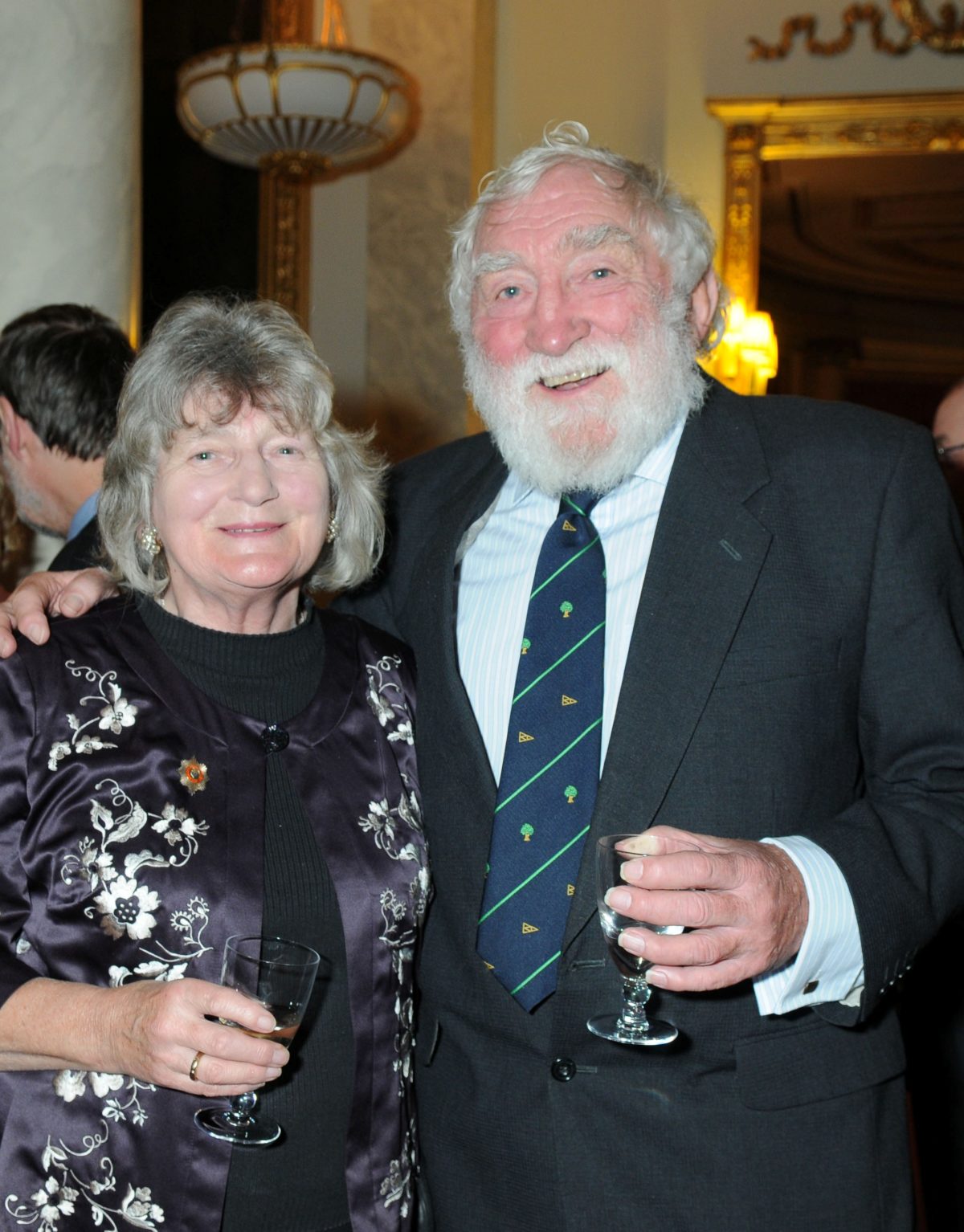 Arriving back to the UK after spending his 50th birthday in a Tasmanian jail following his arrest in the full glare of the world’s media for trying to save the Franklyn River, a World Heritage Site, he faced a packed press conference at Heathrow Airport. Was David Shreeve there? he asked, and if so what was he doing next?  What Bellamy didn’t know were the plans to re-unite him with Rosemary and his children live on that day’s Blue Peter. His arrest had been featured in news bulletins the world over and if he’d not been a celebrity before, he was now.

Once out of the press conference it was back to the Shreeve family home in Chiswick, which was to become a frequent Bellamy base, for a welcome fried breakfast.

The Conservation Foundation benefited from this along with the many other organisations Bellamy had become associated with.  Together with his not-inconsiderable proportions and his unconventional dress sense, his distinctive appearance was instantly recognisable. Wherever he went he always attracted total strangers who would suggest ideas and campaigns for him to support.

Some of these were adopted by the Foundation which found itself encouraging the protection of yew trees, Madagascan rainforests, New Zealand Kakapos, Tasmanian Albatrosses not to mention Great British Oaks in the Bisto Kids Wonderful World of Nature. 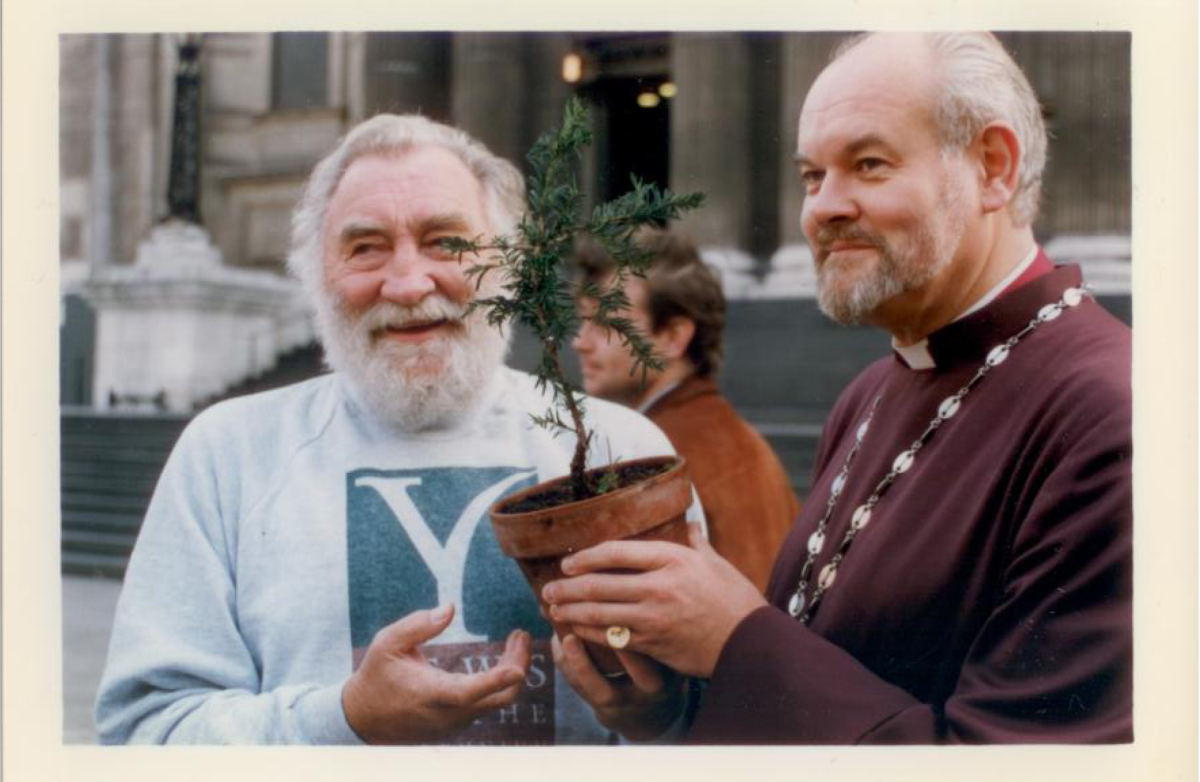 David was a big supporter of the Conservation Foundations Yew tree initiatives.

After two years in the UK, the Ford Conservation Awards, moved into Europe and ran for 18 years – an enviable record in the world of commercial sponsorship.  The Foundation is proud of the number of long-term programmes it has managed involving companies such as Wessex Water, Trusthouse Forte, Rio Tinto, 02 and media organisations such as The Sunday Times, The Sunday Telegraph, The Observer. Not all of whom have survived as long as The Conservation Foundation has!

Bellamy the scientist found that his views on climate change faced opposition from many not just in environmental circles, but also the in the media and government.  Both he and Shreeve had always tried to keep The Conservation Foundation out of major political issues and very soon Bellamy began to feel the effects of his personal views with a sudden reduction of media opportunities. Environmental organisations who had gratefully used his support and endorsement in the past, removed him from their letterheads and promotions.

But he remained as president of The Conservation Foundation. Nearing the grand age of 80, he decided that an element of retirement and family life might be welcome whilst continuing to receive countless invitations to lecture, appear at garden shows and donate items for charity auctions.

To celebrate his 80th birthday the Foundation worked with CIWEM, one of many organisations to have honoured Bellamy with special membership, to organise a David Bellamy Lecture. Hosted by HRH Prince Philip, this took place at Buckingham Palace attended by many of David’s friends and colleagues.

The Conservation Foundation continues to create and manage environmental projects and programmes from its base in at the Royal Geographical Society in Kensington Gore.  Whilst much commercial sponsorship for the environment has been replaced by in-house social responsibility initiatives and charitable trusts, the Foundation has been successful with its applications to lottery funding to support further work with elms, yews, planes and mulberry trees.  It has also been funded by the Ministry of Justice to bring its Gardening Against the Odds expertise to create Unlocking Nature, a project to green parts of Wandsworth Prison and the National Lottery is funding an extension to the highly successful garden tool refurbishment programme Tools Shed in six prisons.

The Conservation Foundation’s website archives – not to mention office filing cabinets – record a host of individual projects involving all age groups in what the Foundation describes as ‘positive action, news and interests’. 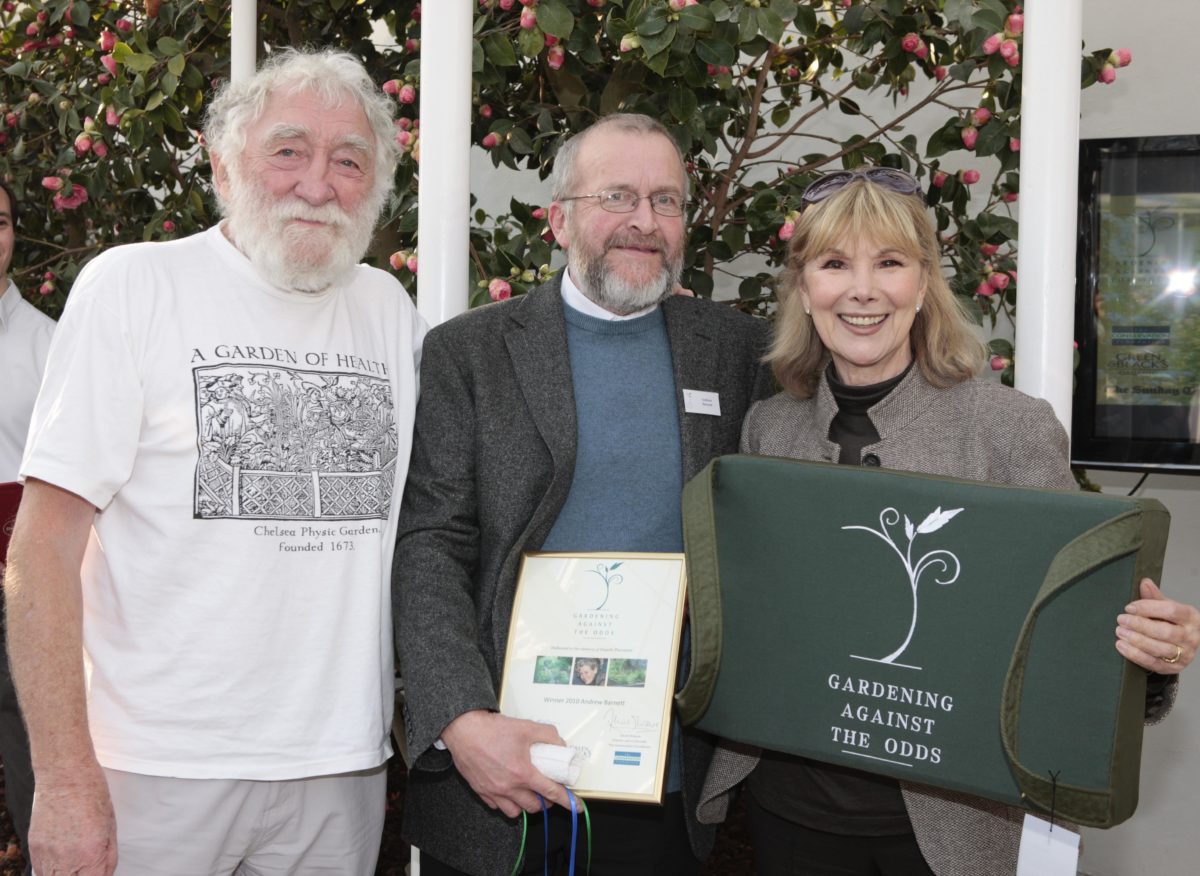 David Bellamy with Conservation Foundation supporter Susan Hampshire and the first Gardening Against the Odds winner.

It is also helping other organisations who are finding the current climate difficult to maintain a headquarters, staff and active programme by providing an umbrella of a prestigious address and almost 40 years of experience and contacts.

And it all began when two very different Davids met to plant a tree and created a unique institution which they hoped might help spread the positive news about the environment and which has been bringing people and the environment together since 1982.