The roots of The Conservation Foundation go back to an elm planting ceremony in October 1979 in Harlow, Essex, which grew into a European-wide project with the support of Pitney Bowes. 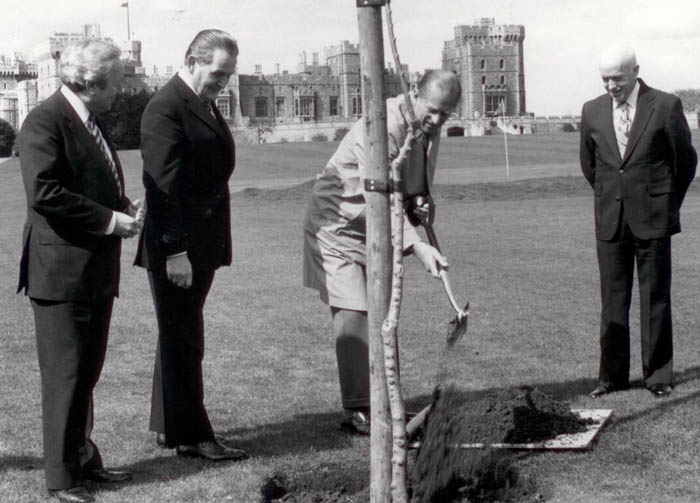 Elms Across Europe raised awareness of the plight of the English Elm and helped to provide a tree which enabled elm biodiversity to be maintained. The scheme also showed commercial organisations that there was an opportunity for them to become involved in environmental issues. As a result Pitney Bowes supported the launch of The Conservation Foundation in 1982.

For the Foundation the year also marked the start of the Ford Awards, a conservation grants scheme that ran for almost two decades, the recording of Serefina: The story of a whale, which was voiced by David Bellamy, Joanna Lumley & Tom Baker, and the first Conservation Annual.

As well as publishing the second Conservation Annual, 1983 also saw the launch of the Acorn Green Toys and Comics which enabled a children's nature area to be created in Sherwood Forest.

The year saw the Foundation work withNatWest on the Environmental Entrepreneurs Guide, the launch of the Rare Species Board Game, and Spike Milligan help to launch the third Conservation Annual. 1985 also saw the launch of the Young Scientists for Rainforests grants scheme for ethno-medical and ethno-botanical research.

Healthier Profits: Business, Success & The Green Factor was published, and The Country House Awards were launched with the support of The Sunday Telegraph and Jackson-Stops & Staff.

The year saw the launch of the Ancient Yew Tree and, with the Great Storm, also the Observer Tree Appeal to help those in need. The What? On Earth book was also published, along with the Environment Now Magazine and the Bisto Kids Wonderful World of Nature book. David Bellamy also helped launch the Foundation's Oak Wood Map of Britain.

The Foundation worked with Osborne & Little to produce the Puff Fabrics for Barn Owl Conservation.

The TSB Environmental Investor Fund was launched for environmental research into the investments held, it also saw the launch of the Network 21 magazine to help environmental initiatives and organisations collaborate, along with various products to raise funds for environmental schemes including the unusual Fluppets - children's puppets to support the Madagascan Environmental Research Group - a Wildlife Wallpaper Range, the Save the World Board Game. There was also the Daily Telegraph & Natwest Clean Technology Competition and the Lifestyle Magazine, the "green guide to healthy living".

The new decade brought with it the start of the Parish Pump Programme, a DEFRA-supported newsletter to help communities collaborate on green initiatives and become aware of the support available to them. The Alp Action campaign also launched with the Bellerive Foundation, and the PA Golden Leaf Awards were launched to encourage good environmental management within the business community. The Cooking to Conserve book was also published to support environmental work in Kenya and the Scouts Green Charter was established. The CO-OP Wildlife Families Fund was also established for environmental projects such as Scottish barn owl conservation, re-introduction of Chough birds in Cornwall and the Nower Wood Dormice Project.

The London's Green Corners Awards were launched, along with a competition with BBC Radio 5: In the News for young reporters. The year also saw an Awareness Tour of Peru's Environment. 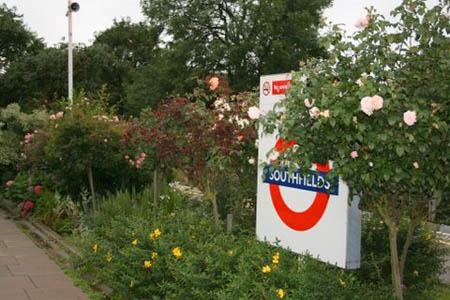 Celebrating the 777th anniversary of the signing of the Magna Carta, a New Magna Carter was launched. The Tourism for Tomorrow Conference was also run with British Airways, whilst the Foundation also published The Road from Rio after conducting a survey of business views of the 1992 Rio Earth Summit. 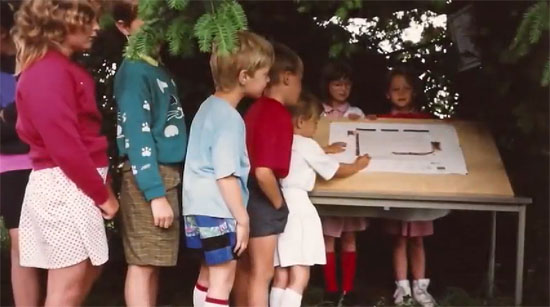 The grant giving Lloyds Alerts were launched for community groups and an initiative to encourage support for Russia's environment was launched at the Victoria & Albert museum, with a conference in Suzdal in Russia the following year.The year was also the start of the Wessex Watermarks, a grant giving scheme that the Foundation runs to this day.

In 1994 the Foundation launched the Channel 4 Amateur Naturalist Pack, the LEDU Guides to The Green Economy support videos (no Youtube yet!) and David Bellamy planted Kew Garden's Time Capsule.

The first of a series of Master Classes featuring leading experts in environmental fields for business executives with environmental responsibilities began.

The David Bellamy's Conservation Awards were launched to encourage good practice in the tourism industry, along with a series of Elm Workshops for national and European elm enthusiasts & local authority tree officers.

The first of many editions of Yew News was launched as was the Walt Disney Children's Summit which brought together young people from around the world to share their environmental experiences.

The Yews for the Millenium project began distributing thousands of saplings and a song by Graham Preskett was produced for the occasion. 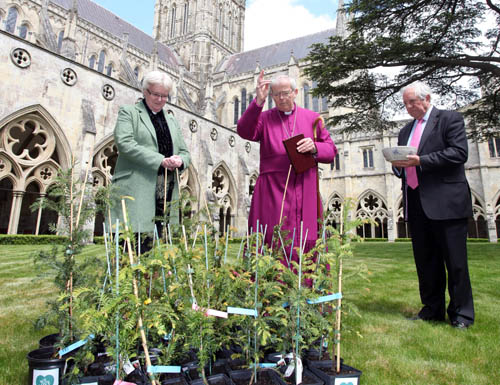 The Foundation helped to form the Friends of St James' Cemetry who campaign for the restoration of an important site in the centre of Liverpool, whilst the Network 21 publication went digital with Newsnet 21. Whilst a series of events with the New Renaissance Group began including a workshop held in Edinburgh which brought together experts sharing an interest in action to promote a sustainable future for humanity in harmony with nature.

Big Bird Races, designed to spotlight the plight of the albatross from long line fishing, began with the Challenge cup presented by Prince Philip.

The Foundation began it's first project with O2, the O2 Its Your Community awards which gave grants for community projects, and also the launch of the Tools Shed garden tool recycling project for prisons, schools and community groups. 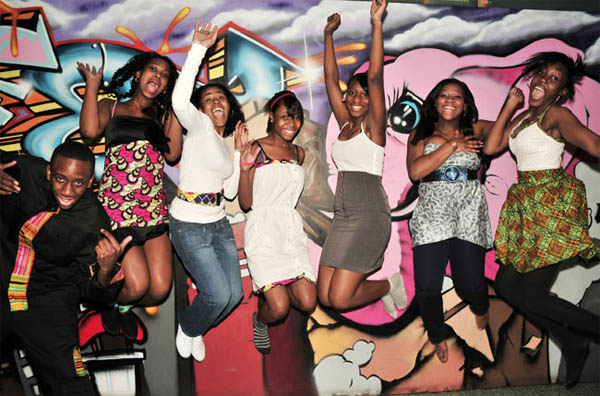 A a pop-up allotment in one of the world's most famous gardens was undertaken through the Spring Renaissance at Covent Garden which showcased among the best of the London's Green Corners awards. 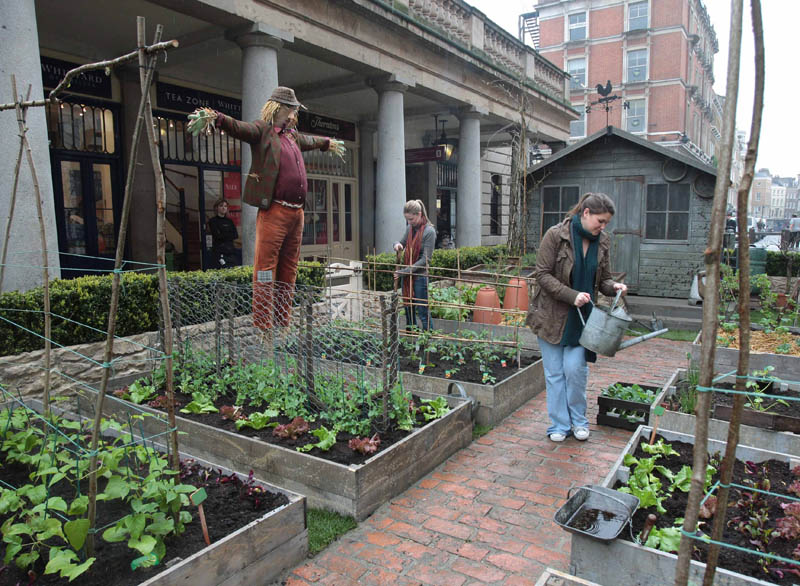 Our nationwide elm project, The Great British Elm Experiment was launched. So far it's provided saplings to over a thousand schools and community groups. 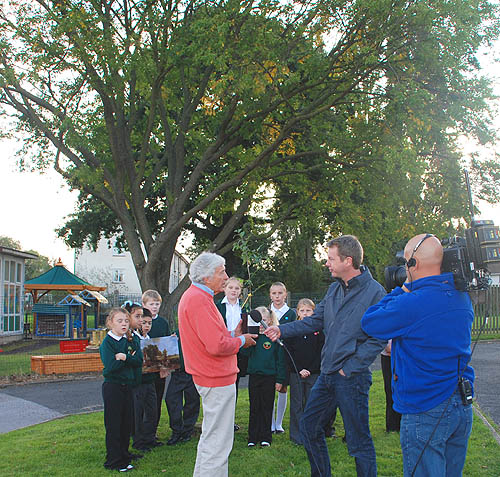 Gardening Against the Odds which honours unsung gardening heroes who bring joy to others was launched with The Sunday Telegraph, whilst our second project with O2, the O2 Think Big awards were also launched, with a new focus on grants for young people. 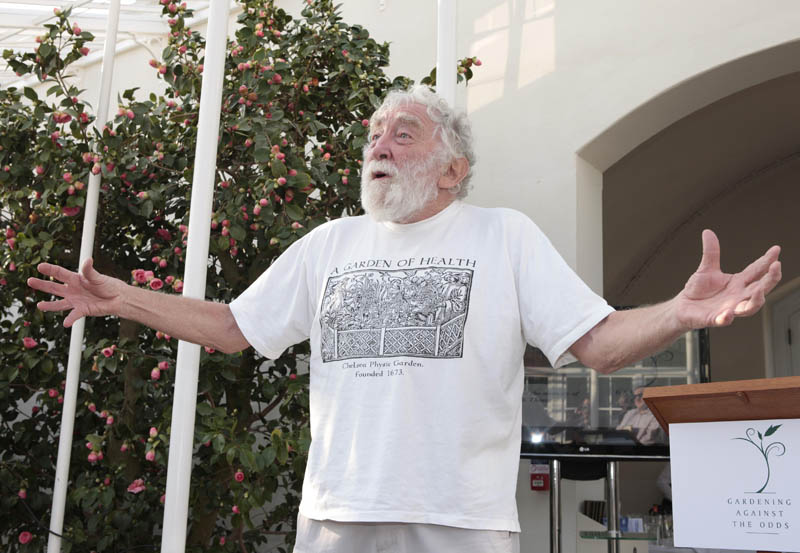 Our Heritage Lottery Fund supported Ulmus londinium project was launched to raise awareness of London's elm heritage and to record and regenerate the elm population.

In 2012 the Foundation celebrated it's 30th anniversary!

Gardening Against The Odds entered its fourth year, with celebrations of the previous years winners at Syon Park, presented by the Dutchess of Northumberland, and the new awards launched later in the year. The Ashes to Ashes garden, celebrating The Great British Elm Experiment, was also display at the Hampton Court Flower Show. 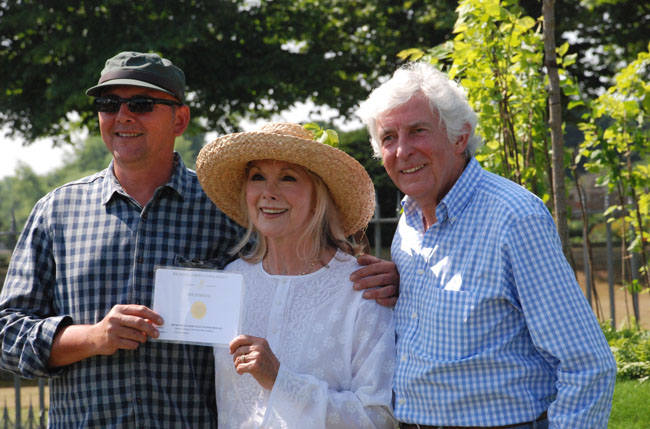 The Sussex coast is the last bastion of the elm in England, and Ulmus Maritime was launched to raise awareness of its importance, and support the Dutch Elm Disease control programme in the area with a new sculpture, workshops, events, an elm monitoring phone app, and a replanting programme. 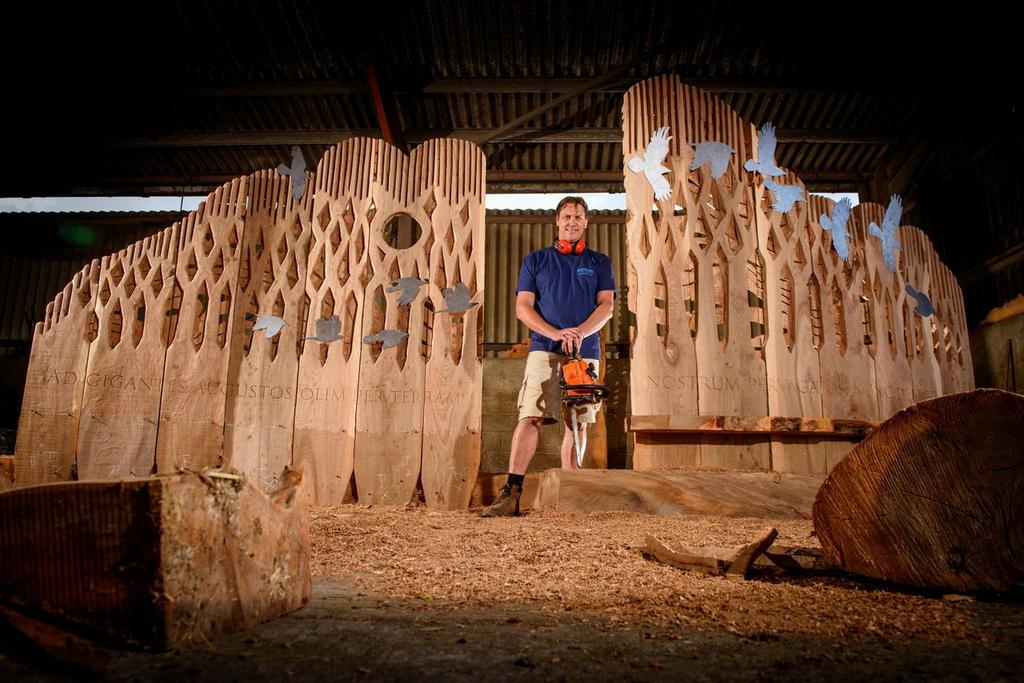 Building on the success of the Millennium Yews project, the We Love Yew campaign was launched to conincide with the 800th anniversary of the Magna Carta, which is thought to have been sealed beneath the ancient Ankerwycke yew at Runnymede. The Ulmus Londinium art installation at Somerset House was also revealed during National Tree Week, with workshops, seminars and an online map helping people to discover London's magnificent elm trees and history. 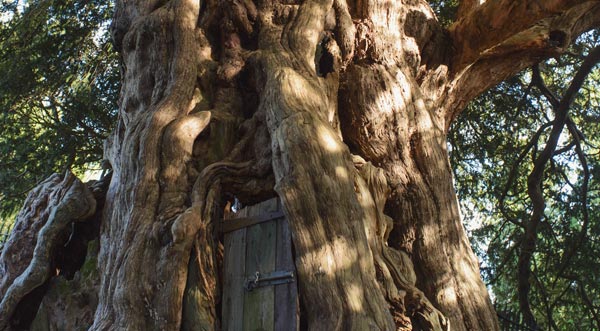 Morus Londinium launched to unravel the tale of London's mulberry trees, and the story they tell of the capital's history, including Spitalfield's Huguenot silk weavers. The public recorded hundreds of veteran mulberry trees not previously known about, whilst researcher Dr Peter Coles led guided walks and research into these fascinating natural relics of our past 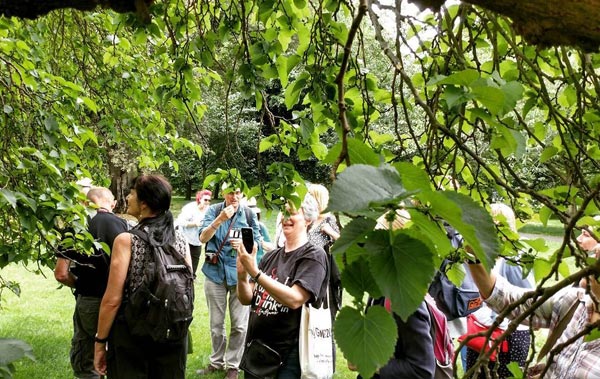 The Tools Shed recycling project expanded its reach thanks to the Big Lottery Fund, whilst the Foundation greened Wandsworth Prison. New garden spaces, horticultural workshops and bee and chicken keeping are transforming one of the oldest prisons in the country. 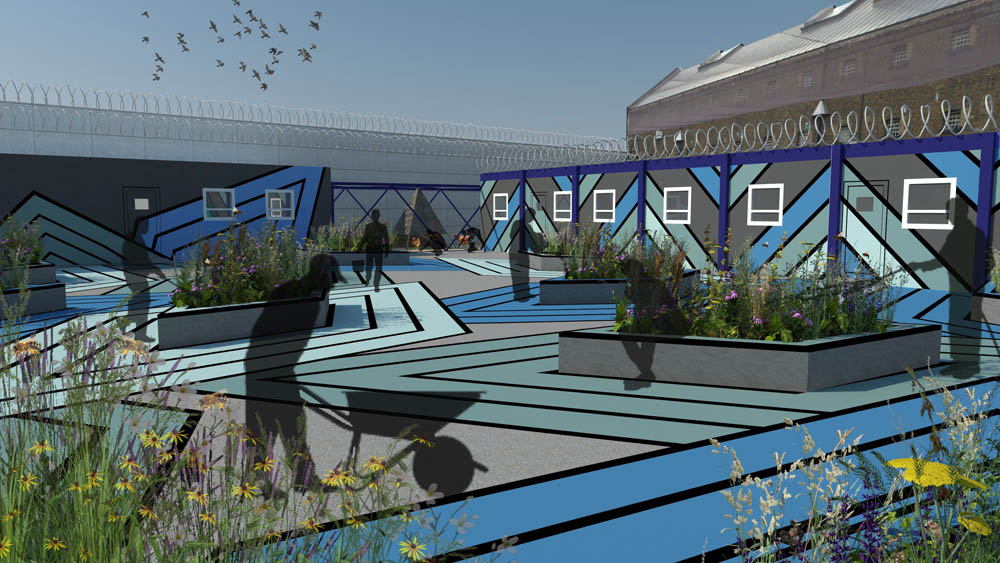